Auckland has more boats per head than any city in the world. Fortunately they are never all out at the same time, but on special occasions an truly alarming number can take to the water.

Perhaps the most appealing aspect of boating in Auckland is the way it offers an anchorage for any occasion. Whether its a picnic lunch in a fizz boat or an all day spinnaker run that takes your fancy, you'll end up somewhere where the birds sing, the fish splash and your anchor sticks. Blasting up the harbour under the resentful gaze of sweaty commuters choking in rush hour traffic is the perfect way to begin any Gulf cruise, and Westhaven's enormous marina is ideally placed for this. Its 1500 berths are right beside Auckland's Harbour Bridge and just 10 minutes from downtown. The Americas Cup base, ferry terminals and shipping wharves and finally Bean Rock light house slip by on the right and North Head - an old artillery battery and the entrance to the Harbour - passes on the left.

The block of reclaimed land between downtown and the marina is worth a wander around. It is being developed as home to the Americas Cup defence with millions and millions of dollars being spent on facilities for the challengers, new hotels and deep draft berths for visiting megayachts The Maritime Museum is here, as is the huge service industry that has grown up around Westhaven. This is the place to look for that snazzy colour co-ordinated wet weather gear and hard to get charts of The Falklands.

Ahead is Rangitoto island, a bush covered extinct volcano and icon of Auckland. Part of the Hauraki Gulf Maritime Park, it provides a unique environment for coastal vegetation and shelters Browns Island - a delightful little lunch spot just off the entrance to the Tamaki Estuary and Half Moon Bay Marina. Beyond Browns is Motuihe Island - a feasible overnight anchorage and a thoroughly civilised park with an ice cream shop, wharf, good swimming beaches, playing field and even an olive grove with real olives.

Some boat charters in the Auckland & Hauraki Gulf area

Beyond Motuihe, Waiheke Island bears more similarity to a suburb than an island. Blessed with a commuter ferry service, it has sprouted executive homes, petrol stations and real estate agents offices. It has however, also produced a pleasing number of vineyards, cafes and little places to stay. Worth cruising in to for dinner sometime.

Trundling down the Tamaki Strait at the start of a long weekend in the company of hundreds of other boats is a surprisingly enjoyable experience, but by the time Waiheke is fading in to the distance the crowds will have cleared and no one is likely to be frightened if you take off your shirt. Coromandel Peninsula, with its delightful Te Kouma Harbour is 10 miles away across the Firth of Thames, while Cape Colville, gateway to the South, lies 15 miles to the North East. There is a strong rip runs around the Cape, and if the wind and tide conspire a character building sea can develop in this area. 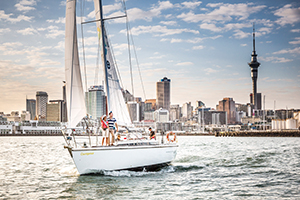 Ignoring the delights of the outer Coromandel Coast for now, a northerly course and about 20 more miles brings the excursionist to Great Barrier Island. Some 20 miles long, 6 or 7 across and 620m high, it has a permanent population of around 1000 people, making it intimate while (mostly) avoiding inbreeding. Two main harbours, Tryphena in the South, and Fitzroy further north offer shelter and supplies. There is some fine wending and excellent fishing to be had around the islets between the two harbours, and entering Port Fitzroy through Man O' War Passage is a treat not to be missed.

A Saturday night visit to the Fitzroy Boating Club (up the hill behind the wharf) will round off your visit nicely, and a mooch around the coast with a bit of a dive should see you pick up a crayfish or two on your way out. If you miss out, a trip to the Mokohinaus - 15 miles NW, will almost certainly save the situation.

However, presuming you have caught your dinner, pass to leeward of Little Barrier Island and listen to the bird songs of this remarkable nature reserve. Landing is prohibited, so carry on across to Kawau Island, just off the coast and a little way down from Leigh.

Kawau was once owned by Governor Grey, an early colonial administrator who built an impressive home and introduced wallabies (a kind of mini kangaroo) to the island, which also supported a copper mine and a smelting plant . The mansion has been fully restored and opened to the public, the remains of the melting chimney has been declared a historic place and the wallabies have gained pest status.

Kawau is home to a number of permanent residents and a regular ferry service runs from Sandspit on the mainland. Handily placed as a weekend destination or an overnight anchorage for vessels travelling to the Bay of Islands, Kawau's Bon Accord Harbour and Mansion House Bay see a massive influx of vessels at the start of a public holiday. Early morning dips are not advised on such occasions.

The 25 mile trip back to Auckland passes between Whangaparoa Peninsula and Tiritiri Matangi - another wildlife reserve, but one which is open to visitors. On the Auckland side of the peninsula, Gulf Harbour Marina with its canal apartment development, international golf course and huge number of berths makes a handy coffee stop before the final leg back to Rangitoto.