Of all New Zealand's cruising grounds, the Bay of Islands is probably the finest - endless sheltered bays, clear, clean water and a climate that is consistently warmer than anywhere else in the country. Ferries and all manner of excursion boats ply across and around it and there are boats everywhere...

Sail power ruled in the new colonies and when New Zealand was first colonised ship’s masters had a lot of say in where the original settlements were built. It is therefore entirely reasonable to expect that sailing in and out of the site of New Zealand’s first capital should be as easy as pie, and it takes only the faintest sprinkle of salt in your veins to see why Russell was made the nation’s first capital.

Today the wonderful Russell wharf is the centre of town, and the parade of charter yachts, ferries, gamefishers and private vessels that come and go makes it a great place for casting an eye over some of the boats. All the essential boatie facilities – scuba fills, laundromat, butcher, pubs and so on are within easy reach, and the town is mercifully free of motor vehicles, with regular ferries to Paihia providing connections to buses and the world at large.

The legendary Bay of Islands Swordfish Club, author Zane Grey's favourite hangout back in the thirties, has a splendid verandah that overlooks the wharf. Entry to this venerable institution is restricted to members and their guests, but judicious pestering of Graeme MacIntosh, skipper of Mako and a prominent club functionary, might get you an invitation. Alternatively, if Hot Rod happens to be tied at the wharf, offer to buy Roy Harrington a drink and let him suggest the venue. The interior is gloriously festooned with numerous pieces of dead fish, several tons of silverware and the names and deeds of countless heroic fisherpersons.

Some boat charters in the Bay of Islands, Northland area

See all charter boats in Bay of Islands & Northland 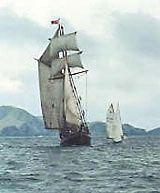 The TUCKER THOMPSON reaches across the bay
Early in January, the Tall Ships Race lines a motley assortment of veteran and multimasted vessels up off the end of the wharf for the firing of a cannon. Prominent among the fleet each year are some of our beloved listees. Book early if you want to join them. After a strenuous day of cut throat water bombing and insult hurling, the contestants gather at Russell yacht club for a huge hangi*, prizegiving and tactical analysis.

Paihia is the tourist centre of the Bay of Islands – zillions of motels and a very busy wharf bedecked with offices, advertisements and uniformed tourism officials shunting their clients in and out of buses and boats. The bulk of the Bay’s skippered charter vessels and day trips depart from here, and a brand new colonial style booking office offers a boggling selection of water and land based activities.

A couple of miles further up the channel from Paihia, Opua is the Bay’s deep water port. Opua is the place to look for bareboat charters, and while there is quite a current running past the wharf, access by water is very easy and the locals are good and friendly. It is a port of entry for overseas vessels, and during the hurricane season in the Pacific (November to May) the wharf’s coin operated shower and laundry facilities are jam packed with foreign adventurers.

Beyond Opua, the Waikare Inlet is a great spot for gunkholing. Somewhat shallow in parts, it pays to do your exploring on a rising tide. Amazing mangrove forests abound with oysters that have escaped from neighbouring marine farms, and lifestylists in lavish homesteads share the coastline with an assortment of interesting eccentrics.

To most people, the real Bay of Islands is that magical playground that takes in Te Rawhiti inlet and the necklace of islands beginning with Motuarohia and ending in Urapukapuka. The mainland adjoining Te Rawhiti meanders around and about and back in on itself, resulting in a huge number of sheltered inlets, beaches and natural harbours facing any direction you like.

OPITO BAY: One of the best anchorages in this area is Opito Bay, with swinging room for about 80 boats and enormous Pohutukawa trees that overhang a fine swimming beach. The water in the inlet is clean and warm and is regularly visited by dolphins.

Heading across to the Northern side of the Bay, either around the remarkable flat topped Black Rocks, or through the sandy Kent Passage brings you to Doves Bay Marina at the mouth of the Kerikeri inlet. A cruise up the inlet ends at the Stone Store, New Zealand's oldest building, where a taxi from the cafe will get you to Kerikeri township and the region’s only decent sized supermarket in a couple of minutes.

Load up on stores and head on out to the coast where a very pleasant day’s sailing will take you past the wreck of Greenpeace's Rainbow Warrior, a world famous marine reserve and dive site. Mid afternoon should have you slap bang against the towering cliffs at the back of Whangaroa Bay. At the very last minute, the harbour entrance appears and the fiord-like Whangaroa Harbour opens before you.

The water here is surprisingly deep, and the whole harbour drips with history. No longer a commercial port, it was one of the last centres of a booming kauri timber trade. The once gloriously decrepit Kingfish Lodge at the mouth of the harbour (in the foreground of the picture above), and accessible only by water has recently suffered a severe makeover and is now regularly filled with movie stars and vacationing despots.

Continuing north past a series of magnificently rugged and broken cliffs to Doubtless Bay reveals the sweep of Tokerau Beach with Mangonui Harbour tucked in behind a headland at its Southern end. Fifty miles beyond Mangonui lie isolated Parengarenga Harbour (which should be entered only with local knowledge or under ideal conditions) and North Cape.

North Cape is a common operating limit for many charter boats, although certain vessels have exemptions that allow them to carry on to the rich fishing grounds around Three Kings Islands.