Starting in December all the way to March, Auckland will be hosting a multitude of events for the 2021 America’s Cup.

From 17th-20th March the America’s Cup World Series (ACWS) final event, a Christmas regatta, will kick off an exciting summer full of yacht races in Auckland. The ACWS is a great opportunity for the teams to take their second AC75 yacht out for the first time in racing conditions.

The Prada Cup is when things are getting serious. It takes place from 15th January to 22nd February and the winner will be the Challenger for the 36th America’s Cup competing against the Defender, Emirates Team New Zealand. The America’s Cup races are held between 5th and 21st March 2021.

On 22 October 2020 the America's Cup Arbitration Panel decided to scratch 2 the race courses just off Takapuna and Devonport from the America's Cup. Those are the courses with the closest view of the races for land based spectators. Team Emirates New Zealand said they will "move heaven and earth" to get the 2 race courses reinstated. We'll keep you posted... 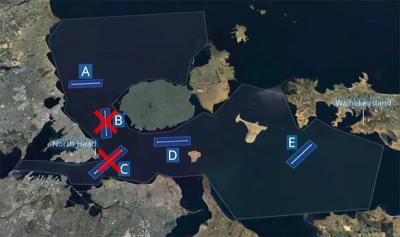 How you can watch the races

On the water from spectator boats

Like in the past years, a big spectator fleet made of small boats to luxury yachts is expected to be at the race course. This is probably the closest you can get to the racing action. There are several America's Cup boat charters in the Auckland area offering this service.

Land based, close to the race course

The races take place in a wide area around Auckland. There are some great natural viewing platforms around the races.

Race Course A
This is the most northern race course and is exposed to north-easterly winds. The best land based viewing locations are around Castor Bay, Milford and Takapuna.

(Race Course B)
This race course is a bit further south than Race Course A, located in the Rangitoto Channel with Rangitoto Island behind it. The beaches from St Leonards Bay to Narrow Neck would be a good place to follow the race action. (see race course update above)

(Race Course C)
This course is in the middle of the Waitematā harbour and several viewing point around the city would be great for land based spectators. Cheltenham Beach, North Head and Mission Bay will be the closest to the racing yachts. (see race course update above)

In New Zealand the America's Cup races are expected to be broadcasted between 4-6pm on TVNZ.

There will be a bunch of official Emirates Team New Zealand fan zones around the country where you can watch the free-to-air race coverage with friends and other fans on big screens. The fan zones will be open from 6th to 15th March 2021 from approx. 4pm to 8pm. The locations are about to be published soon.

All matches will be of the Prada Cup and America's Cup will be live streamed by americascup.com, YouTube and Facebook.